Click the first photo to start a slide show.

The club is again running a raffle for the Royal Children’s Hospital.
We have already raised $225 from the March General Meeting.

HOWEVER, BECAUSE THE APRIL MEETING HAS BEEN CANCELLED YOU MUST PURCHASE THROUGH THE CLUB BANK ACCOUNT AS BELOW.

Please go the extra mile on this - especially with family and friends - because we want to do our bit to ensure this year's appeal is successful despite the circumstances in which we all find ourselves.

There are 4 major prizes:

Tickets are purchased by direct deposit into the club account:
Name: MOA
Bank: Bendigo Bank
BSB: 633-000
Account No: 111081154
In the description put: RCH (insert Your Surname)
Send an email to This email address is being protected from spambots. You need JavaScript enabled to view it. to be told your ticket numbers.

Note: If you cannot use this method. Please contact Peter. Do not deposit through a branch.

Click the first photo to start a slide show.

Queensland member Bevan Slater worked for 4 years building his 6 wheel Moke ute, recently chistened Endeavour, from 2 rusty Moke shells. An appropriate name you would have to agree, because this project was certainly one heck of an endeavour. 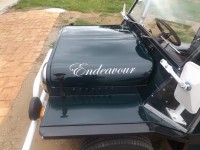 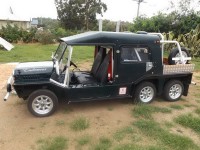 "I was inspired by Sam Brown in Western Australia who built a six-wheeler as a service vehicle", Bevan said. 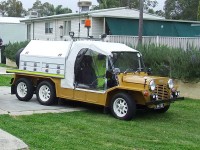 Bevan's unnamed Moke was finally registered on November 14th 2019 and in January 2020 he entered it in the Killarney Show Ute display on a whim. The Moke was awarded:

"Still cannot believe it. I didn't expect to win anything. I just loved chatting with all the people who rocked up. I'm tickled pink."

Bevan has written out a recipe to guide any future Mokee who wants to take on a 6 wheel project - in fact, if the truth's known, any Moke rebuild project. It's been published in a couple of places, but to make the tongue sticking in the author's cheek a little clearer, we took a few liberties when creating a video version of the Recipe for Building a 6 Wheel Moke. Click this link or find it on VIC MOKE, the MOAV YouTube channel.

And there is a postscipt. Did you notice the sticker on Endeavour's sidebox?

"I had a sticker made up for what was our BMC/Leyland Dealership in NSW. Dad sold the place in 1992 after 38 years . I thought it would be a nice family touch." 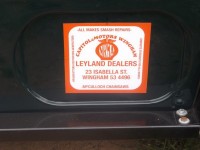 What Can You Do With An Apron?

Click the first photo to start a slide show.
Click the second photo and watch the Presentation Lunch video to find out.

Now you will want your own apron, won't you? Yes! There's only a few left. Contact This email address is being protected from spambots. You need JavaScript enabled to view it..

The 2019 Presentation Lunch was held in the Cabaret Room of the Doncaster Shopping Town Hotel on July 28th.

Rhonda and the committee did a magnificent job with the decorations - and all the other organisation - and the staff of the hotel complemented the effort with a wonderful feast.

About 80 people attended and there were heaps of awards presented.This is Scott Williams receiving his 10 year award. The full list of membership awards is:

Three members Doug Williams (#2), David Yee (#10) and Julian & Linda Walsh (#39) received 50 Year Awards. Unfortunately Julian and Linda were unable to attend. David and Doug both had something to say. 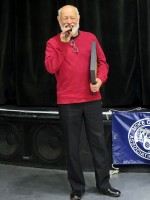 Probably someone should have had something to say about this bunch of Mokees. They are modelling the MOA apron which was one of the gifts to those who attended the day.

If you want to see what it looks like, come to the next meeting, or keep an eye on the Club Products page in Tracks. You've gotta get one for your next BBQ. Hey, perhaps this mob are the first Moke owning Barbie Dolls!

Doug was also presented with awards as Odd Mokee of the Year and Club Person of the Year. Of course, he had even more to say. 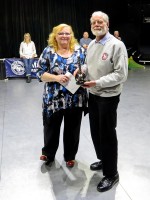 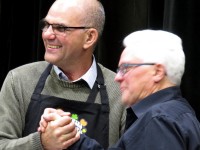 On the other hand, Peter Shackleton was so surprised at being made a Life Member that he was virtually speechless. Well done Peter!

Of course the Dinky Moke Race was the other highlight of the day. Would you believe that the stars aligned and Doug was the winner. What a day!

Of course he had even more to say. In fact he sang the Club's praises. Click the photo to visit VIC MOKE the club YouTube channel to find videos of the 2019 Dinky Moke Race Heat 1 and Final, both of which were won by this car.

June 30th was Memorabilia Day - an event in our celebration of 50 years of the Moke Owners' Association of Victoria. A perfect day for the first public showing of the restored eMoke, which has been 5+ years in the making. This vehicle is being rebuilt to display standard. Restoration to running order is simply not possible. This is how it looked in October 2017 after the first 3+ years.

This is how it looked at the Memorabilia Day.

No room for shopping that's for sure.
The dummy batteries - all correctly connected - were supplied by Century Batteries.

The odometer reading is genuine. This vehicle has only been driven in trialling during its original design and build days at Johns Perry Lifts in the 1980s.

Day done, it's back to the workshop to finalise details like a couple of missing switches.

Thanks Leigh for trailering to and fro. And a huge thanks to all who have brought the vehicle back to this standard - Brad, Bruce J., David, Clive, Bob, Glenn and others, including Bill Bell who organised the sand blasting.

See videos of loading the trailer at our You Tube channel VIC MOKE: